While its cliffs are among the most impressive natural sites in Europe, the artistic and historical heritage of this small maritime town will surprise you.

Take time for a walk up and down these alleys! 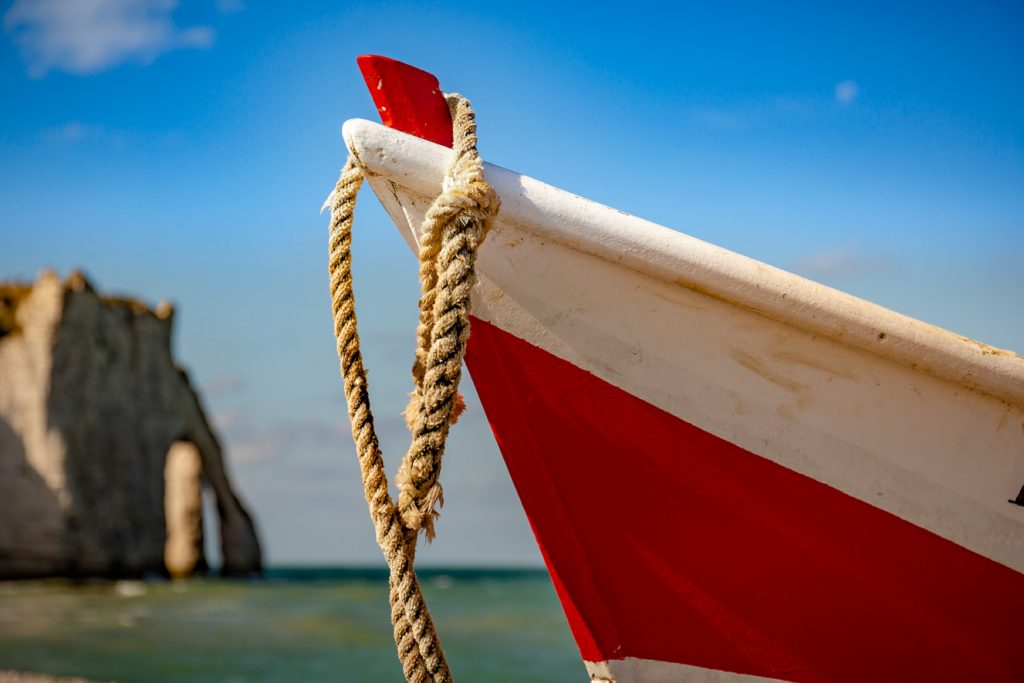 From the fishing village to the seaside resort

Etretat, a small stranding port already well known in Roman times, has long lived to the rhythm of its fishing activities. Traces of this era are still visible on the waterfront: you can see the capstans used to pull the boats up onto the pebbles or the “caloges”, old boats covered with thatch.

The painter Eugène Isabey is the true discoverer of Etretat, which he was the first to paint, in 1820. Turner, Boudin, Monet and many others would offer their vision of the waterfront and the famous cliffs.

The first part of the 19th century in Normandy was marked by the development of sea bathing, much appreciated for its therapeutic virtues. As early as 1840, visitors, industrialists, bankers, rich merchants, artists and journalists from Paris and England flocked to Etretat.

Like Offenbach, some of them had charming villas built in the centre of the village or on its heights. The beach and seafront were equipped with facilities dedicated to these new arrivals: cabins, hotels, casinos… Many of these waterfront buildings were destroyed during the Second World War, but a pleasant walk lets you discover some really elegant villas.

The Etretat Heritage Museum, on the cliff above, tells the entire history of the town, from its origins to the 20th century. 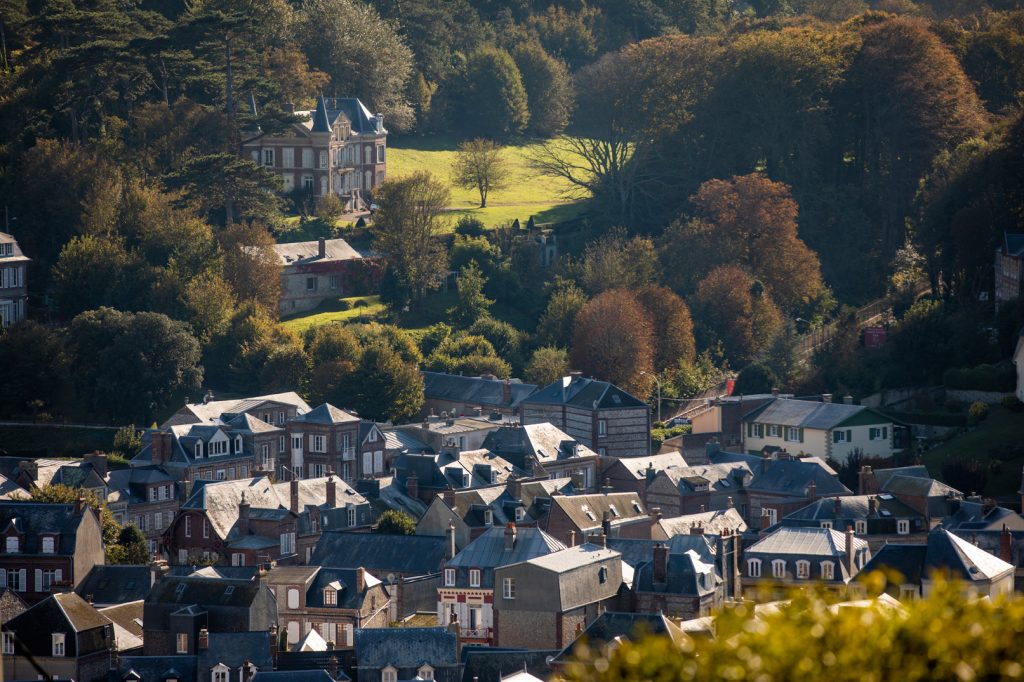 The cliffs and the Aiguille Creuse have made the town of Etretat world-famous. Natural wonders, these giants which rise to nearly 90 metres are ancient witnesses of how the Normandy coast evolved.

Be careful, though, as these areas are fragile and subject to the whims of the tide: don’t pick up pebbles, don’t leave litter lying around and only venture to the foot of the cliffs at the appropriate tide times (posted on the beach, at the first-aid post) and at a reasonable distance from the cliff, which is always subject to the risk of landslides. 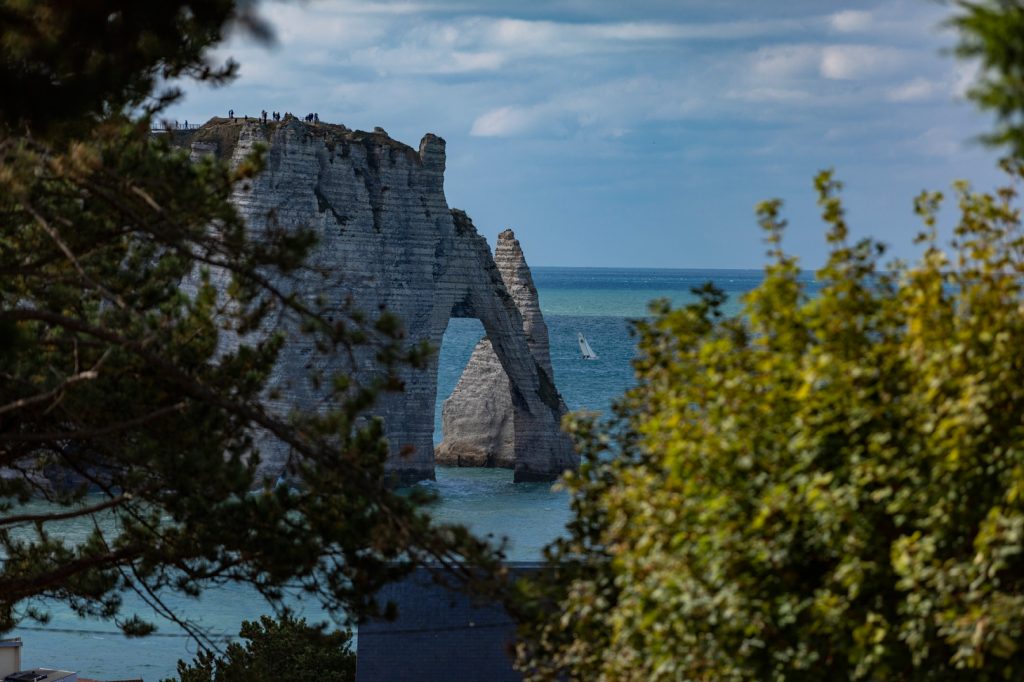 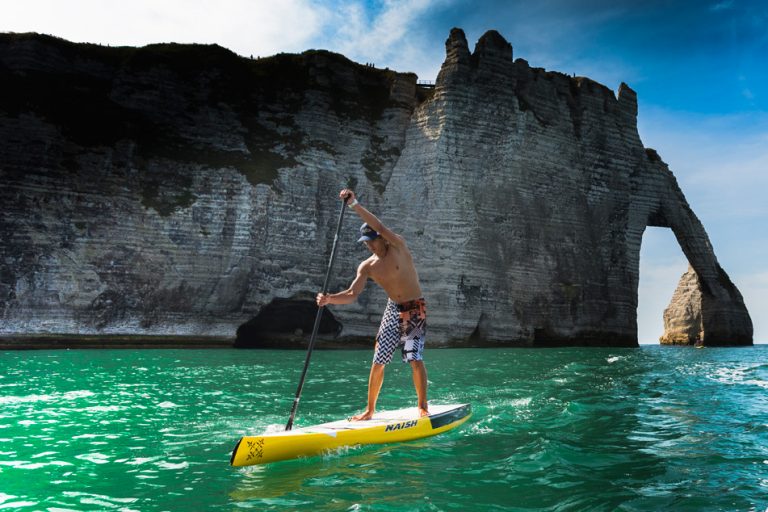 Hiking on the GR21, guided walks in the company of a naturalist guide, discovering the cliffs from the sea on board a semi-rigid boat with Mer pour Tous from Fécamp, a former fishing boat with Navigation Normande from Le Havre, a more sporty paddle or kayak trip at the foot of the arches with Voiles et Galets … Etretat is there to discover at your own pace! 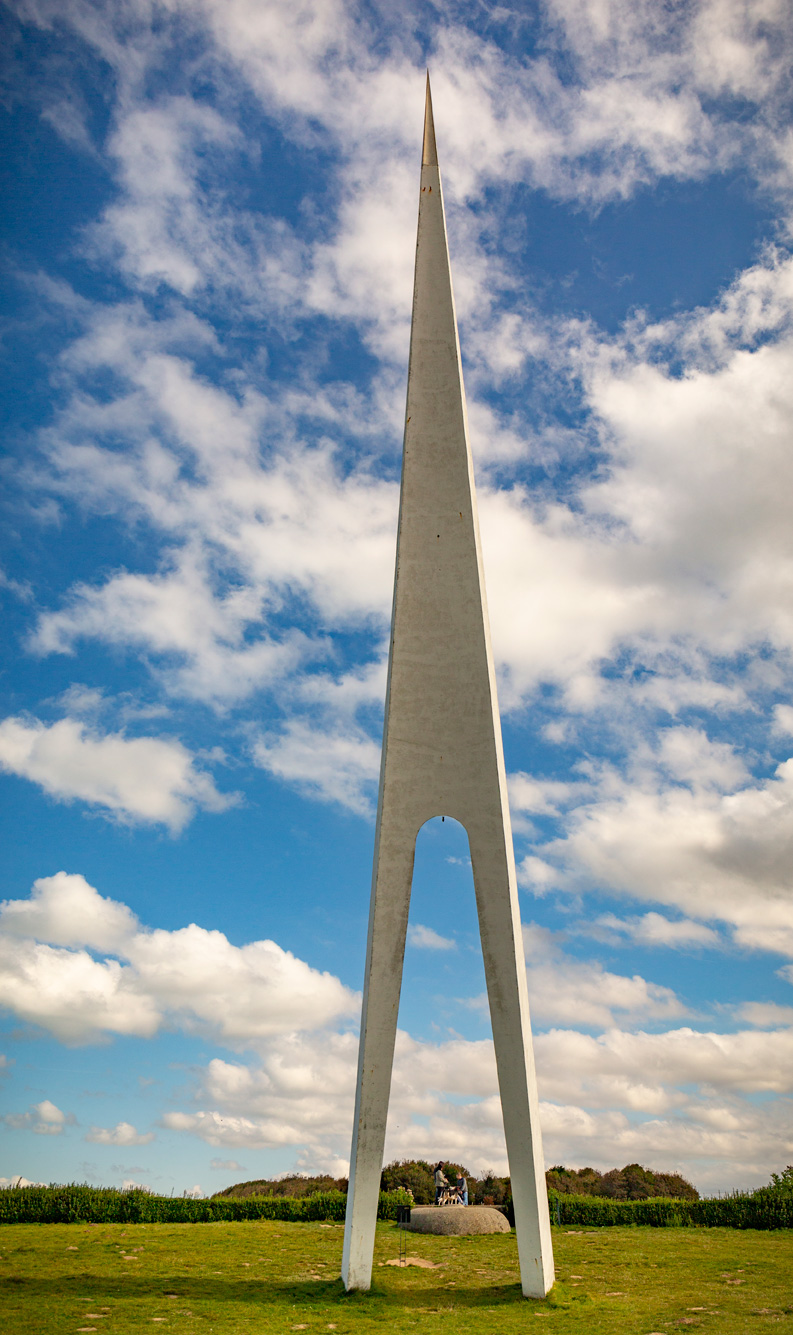 The essential destination: the beach of course! But don’t miss Le Clos Lupin, the Chapel of Notre-Dame de la Garde, the Nungesser et Coli Monument, the House of Maurice Leblanc which offers an original route to discover all about the gentleman burglar, the Heritage Museum of Etretat, Château les Aygues, the former summer residence of the queens of Spain, the covered market which has several souvenir shops or the Parc des Roches, a family leisure area in the town centre.

A few steps from the town centre, you’ll be amazed by the majesty and size of the Church of Notre Dame de l’Assomption, a Romanesque and Gothic architectural treasure built in the 12th century under the patronage of the abbots of Fécamp. British soldiers from the First World War are buried in its surrounding cemetery. 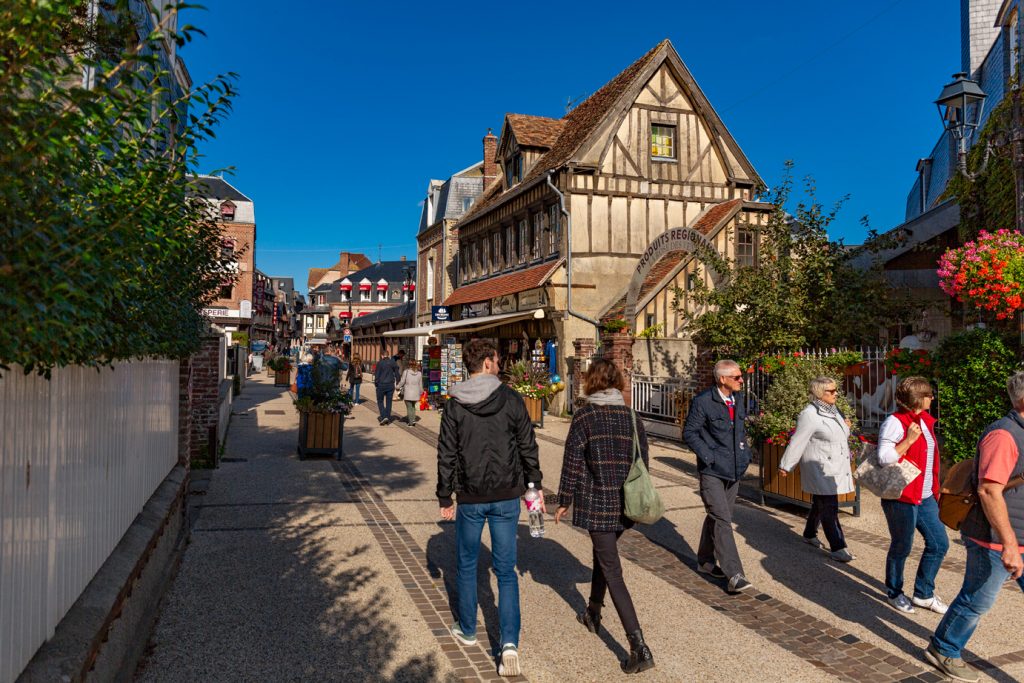 Your stroll is also a great way to discover lots of shops selling local products.
Don’t miss these summer events: Hello Birds, a very friendly festival of contemporary music and discovering the region, the Offenbach Festival which pays tribute to the composer, plus Arts Day which brings together amateur and professional painters for an outdoor painting challenge.

A land of legends

Like all maritime towns of art and culture, Etretat has its legends, each more mysterious and amusing than the last. Here is one of many, the legend of the Olive Fountain. It was at the time when the pagans were invading France. A woman of rare beauty named Olive was washing her clothes in the fountain on the beach when she found herself surrounded by a swarm of “Saracens” (a term for foreigners, they were Vikings). Only a miracle could save Olive. 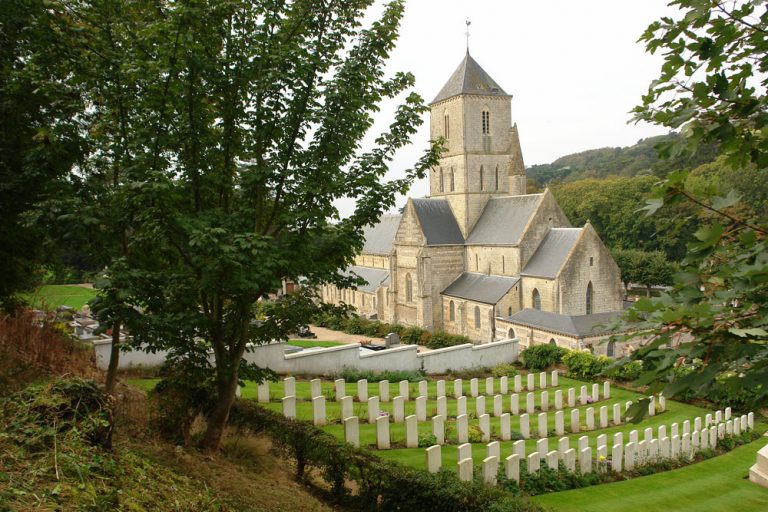 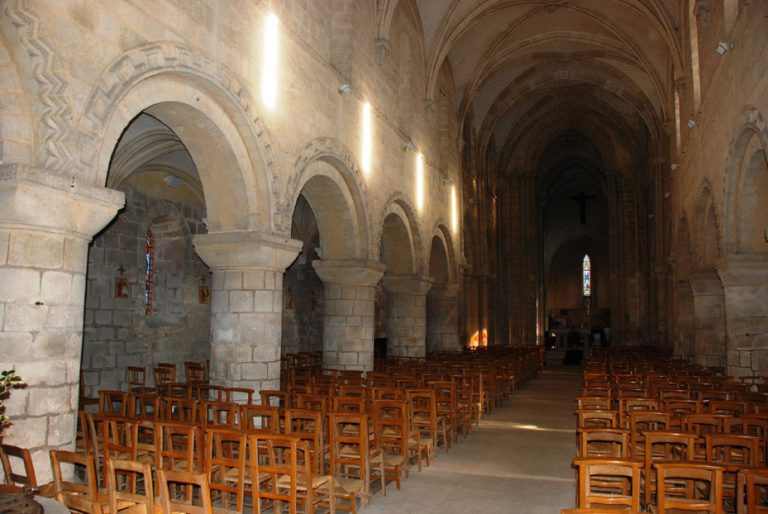 She prayed to God to save her from the hands of these cruel people and vowed to build a beautiful church in Etretat. God answered her, raising a terrible storm that threw the Saracen boats far out to sea. Olive immediately decided to build the church by the sea. But at night, the devil, who at that time did not like Etretat, carried the stones heaped up during the day to the bottom of the Saint Clair coast. Following a dream, Olive ended up building the church where we see it today. 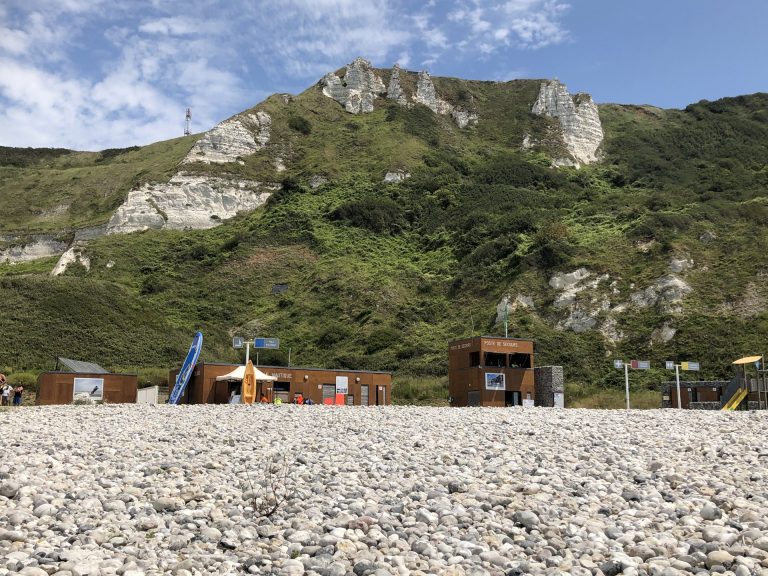 A few kilometres from Etretat, there are several sites to discover: