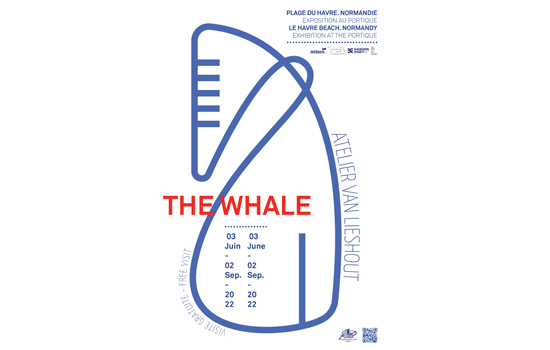 Joep Van Lieshout is a Dutch artist who lives and works in Rotterdam. Regularly present on all the world stages of contemporary art, he exhibits from New York to Venice via Shanghai or São Paulo. His towering projects transcend disciplines, straddling art, design and architecture. In 1995, the artist founded the Atelier Van Lieshout collective, which then became his sole signature. A strong gesture to oppose the myth of the artist
awesome and lonely. AVL enjoys an international reputation for its sculptural installations which are characterized by their provocative and playful tone with a controversial dimension. A certain number of recurring themes resonate in his creations: power, the system, the alienation of man, good, evil, social relations but also the relationship that man maintains with nature.

Facing the sea: The Whale

Atelier Van Lieshout has chosen to make a large sperm whale in Corten steel, 14 meters long, which will be exhibited on the beach in Le Havre.
from June 3 to September 2, 2022. Inspired by the philosophical novel by Herman Melville, Moby-Dick1, today considered as
a masterpiece of American literature, Atelier Van Lieshout and the writer strive to present the sea as the true theater of human comedy: suffering, wickedness, pride, madness, tyranny are personified by the figure of Captain Ahab seeking revenge on the sperm whale which, in the past, broke his leg. An obsessive hunt that will lead to his downfall. “Yes, yes, I will chase her around the Cape of Good Hope, and around Cape Horn, and around the Maelstrom of Norway, and around the flames of hell, before I give up trying to reach her! And that’s what you guys got on board for; to hunt this white whale, on both sides of the mainland and on all sides of the globe until it spews black blood from its blowholes and rolls upside down, fins in the air. (Moby Dick, translation Lucien Jacques, Joan Smith, Jean Giono.) This sea monster deposited on the beach of Le Havre is a manifesto which testifies to the power of nature which Jonah, the biblical character, experienced. The prophet provoked the wrath of God by refusing to obey him: “Now the Lord had prepared a great fish to swallow up Jonah; and Jonah remained in the belly of the fish three days and three nights. From the Middle Ages, the big fish mentioned in the Bible becomes a whale, an invincible instrument of divine punishment. “The Whale” depicts Ahab’s nemesis and Jonah’s prison. Made of steel, a metal created and welded by man, it rests on the pebbles like a boat
being refitted. Portholes reveal a man seated inside the sculpture. Is it the artist, Jonah praying
for his salvation or of Captain Ahab wondering about his conduct? The work thus presented embodies both the human ingenuity whose
the Sperm Whale has triumphed and nature undefeated. This is where all its ambiguity lies.

Monumental work present from June to September 2, on the beach in Le Havre (opposite n°66, boulevard Albert 1er) – Free.